According to a whistleblower that has recently come forward, Census employees have been faking and manipulating U.S. employment numbers for years.  In fact, it is being alleged that this manipulation was a significant reason for why the official unemployment rate dipped sharply just before the last presidential election.  What you are about to read is incredibly disturbing.  The numbers that the American people depend upon to make important decisions are being faked.  But should we be surprised by this?  After all, Barack Obama has been caught telling dozens of major lies over the past five years.  At this point it is incredible that there are any Americans that still trust anything that comes out of his mouth.  And of course it is not just Obama that has been lying to us.  Corruption and deception are rampant throughout the entire federal government, and this has been the case for years.  Now that some light is being shed on this, hopefully the American people will respond with overwhelming outrage and disgust.

The whistleblower that I mentioned above has been speaking to John Crudele of the New York Post.  In his new article entitled “Census ‘faked’ 2012 election jobs report“, he says that the huge decline in the unemployment rate in September 2012 was “manipulated”…

In the home stretch of the 2012 presidential campaign, from August to September, the unemployment rate fell sharply — raising eyebrows from Wall Street to Washington.

The decline — from 8.1 percent in August to 7.8 percent in September — might not have been all it seemed. The numbers, according to a reliable source, were manipulated.

Two years earlier, the Census had actually caught an employee “fabricating data”, but according to this whistleblower the corruption at the Census Bureau goes much deeper than that…

And a knowledgeable source says the deception went beyond that one employee — that it escalated at the time President Obama was seeking reelection in 2012 and continues today.

“He’s not the only one,” said the source, who asked to remain anonymous for now but is willing to talk with the Labor Department and Congress if asked.

The Census employee caught faking the results is Julius Buckmon, according to confidential Census documents obtained by The Post. Buckmon told me in an interview this past weekend that he was told to make up information by higher-ups at Census.

Well, is it really such a big deal that some of the unemployment numbers were faked?

After all, hasn’t the unemployment rate been consistently going down anyway?

Unfortunately, as you will see below, that is simply not the case.  The following are five massive economic lies that the government has been telling  you…

“The Unemployment Rate Has Been Steadily Going Down”

According to the official government numbers, the U.S. unemployment rate has fallen all the way down to 7.3 percent.

That sounds really good, and it would seem to imply that a higher percentage of the American people are now working.

Sadly, that is not the truth at all.

Posted below is one of my favorite charts.  The employment-population ratio measures the percentage of the working age population that actually has a job.  As you can see, this number fell dramatically during the last recession and since the end of 2009 it has remained remarkably flat.  In fact, it has stayed between 58 and 59 percent for 50 months in a row… 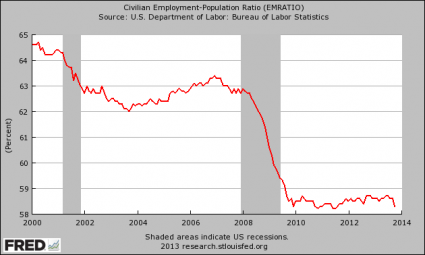 At the moment, the employment-population ratio is just one-tenth of one percent above the lowest level that it has been throughout this entire crisis.

So are we in an “employment recovery”?

Absolutely not, and anyone that tries to tell you that is lying to you.

So how is the government getting the unemployment rate to go down?

Well, they are accomplishing this by pretending that millions upon millions of unemployed Americans have disappeared from the labor force.

According to the government, the percentage of Americans that want to work is now supposedly at a 35 year low… 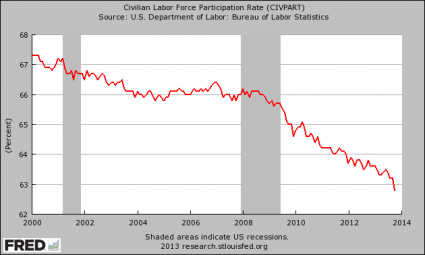 If the labor force participation rate was still exactly where it was at when Barack Obama was first elected in 2008, the official unemployment rate would be about 11 percent right now.  People would be running around going crazy and wondering when the “economic depression” would finally end.

But when people hear “7.3 percent”, that doesn’t sound so bad.  It makes people feel better.

Of course if you are currently unemployed and looking for a job that doesn’t exactly help you.  At this point there is intense competition even for minimum wage jobs in America.  For example, according to Business Insider you actually have a better statistical chance of getting into Harvard than you do of being hired at a new Wal-Mart that is opening up in the Washington D.C. area…

The store is currently combing through more than 23,000 applications for 600 available positions,reports NBC Washington.

That means that Wal-Mart will be able to hire one person for every 38 applications it receives — i.e., just 2.6% of applicants will walk out with a job.

That’s more difficult than getting into Harvard. The Ivy League university accepts 6.1% of applicants.

This is another lie that government officials love to tell.  In particular, the boys and girls over at the Federal Reserve love to try to convince all of us that inflation is super low because it gives them an excuse to recklessly print lots more money.

But anyone that goes to the grocery store or pays bills on a regular basis knows that there is plenty of inflation in the economy.  And if we were being given honest numbers, they would show that.

According to John Williams of shadowstats.com, if the U.S. inflation rate was still calculated the exact same way that it was back when Jimmy Carter was president, the official rate of inflation would be somewhere between 8 and 10 percent today.

But the Federal Reserve certainly doesn’t want everyone running around talking about “Jimmy Carter” and “stagflation” because then people would really start pressuring them to end their wild money printing schemes.

And without a doubt, what the Fed is doing is absolutely insane.  The chart posted below shows that the M1 money supply has nearly doubled since the beginning of 2008… 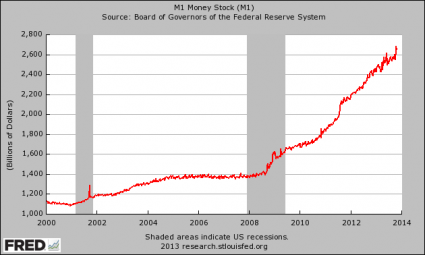 “The Federal Reserve decided today that the economic stimulus must continue.”

There is just one thing wrong with that statement.

As I showed in a previous article, it is a total hoax.

In fact, a former Federal Reserve official that helped manage the Federal Reserve’s quantitative easing program during 2009 and 2010 is publicly apologizing to the rest of the country for being involved in “the greatest backdoor Wall Street bailout of all time”…

I can only say: I’m sorry, America. As a former Federal Reserve official, I was responsible for executing the centerpiece program of the Fed’s first plunge into the bond-buying experiment known as quantitative easing. The central bank continues to spin QE as a tool for helping Main Street. But I’ve come to recognize the program for what it really is: the greatest backdoor Wall Street bailout of all time.

Meanwhile, median household income in the U.S. has fallen for five years in a row.

Meanwhile, the federal government is now spending nearly a trillion dollars a year on welfare.

Meanwhile, 1.2 million students that attend public schools in America are now homeless.  In fact, that number has risen by 72 percent since the start of the last recession.

“Obamacare Is Going To Be Good For Middle Class Americans”

#1 We would all be able to keep our current health insurance plans.

#2 Millions more Americans were going to be covered by health insurance.

#3 Most Americans would be paying lower health insurance premiums.

Well, it turns out that all of them were lies.

At this point, approximately 4 million Americans have already had their health insurance plans canceled due to Obamacare, and according to Forbes that number could ultimately reach 93 million.

And so far only about 100,000 Americans have actually signed up for Obamacare, so that means that the number of Americans with health insurance has dropped by about 3.9 million since the beginning of October.

Meanwhile, Americans all over the country are being hit with a massive case of sticker shock as they start to realize what Obamacare is going to do to their wallets.

And if you are a young man, you are going to get hit particularly hard.  At this point, it is being projected that health insurance premiums for healthy 30-year-old men will rise by an average of 260 percent.

But you don’t have to be young to pay higher premiums.  As I mentioned the other day, one couple down in Texas was recently hit with a 539 percent rate increase.

“The U.S. National Debt Is Under Control”

The mainstream media would have us believe that the budget deficit is now under control and the U.S. national debt is not a significant problem any longer.

But that is not the truth.

The truth is that we are on pace to accumulate more new debt under the 8 years of the Obama administration than we did under all of the other presidents in all of U.S. history combined.

Every single hour of every single day, our politicians are stealing about $100,000,000 from future generations of Americans.  It is a crime so vast that it is hard to put into words, and it is literally destroying the economic future of this country.

Over the last 13 and a half months, the U.S. national debt has increased by more than 1.12 trillion dollars.

If you were alive when Jesus Christ was born and you had spent a million dollars every single day since then, you still would not have spent that much money by now.

And most Americans don’t realize this, but the U.S. government must borrow far more than a trillion dollars each year.  Trillions more in existing debt must be “rolled over” just to keep the game going.

For example, the U.S. government rolled over more than 7.5 trillion dollars of existing debt in fiscal 2013.

So what is going to happen someday when the rest of the world pulls out and stops lending us trillions of dollars at ridiculously low interest rates that are way below the real rate of inflation?

Our financial system is far more vulnerable than we are being told.  We are in the terminal phase of the greatest debt bubble in the history of the planet, and when this bubble bursts it is going to be an absolutely spectacular disaster.