You’re about to get a very different view of the “recovery” picture that the administration keeps painting for us.

This one, for starters, is accurate.

It also explains why incoming Fed Chair Janet Yellen can’t cut stimulus, which is one of the reasons you have an opportunity to make some money here… especially if you follow my “mid-December plan.” More on that in a minute.

Let’s start with the charts…

The White House positively hates this first one…

Charted Truth No. 1
U.S. payrolls are 1.5 million jobs short of where they were in 2008, and the “partimeification” of America continues unabated. 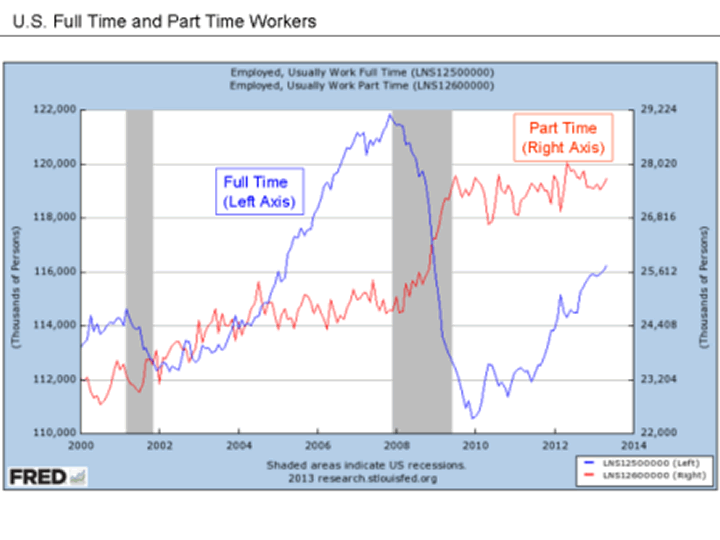 Yes, the White House hates this chart, because it shows – in excruciating detail – that the recovery they keep trying to convince the rest of us is happening is little more than a complete evisceration of our labor base.

At a time when we should be seeing robust growth, what we’re seeing is a huge percentage of productive workers shunted to the sidelines. Actual unemployment is more likely 14% to 17% if you factor in the under-employed and those who have given up looking for work.

Yellen’s already tipped her hand in this department, incidentally, noting that “below average” employment is reason enough to prevent her from raising interest rates – and, presumably, from tanking the stock markets.

Given that the Fed’s current two-pronged mandate emphasizes employment over inflation, she’ll hammer on this notion until the numbers either move the way she wants or somebody can manipulate them to match reality.

Charted Truth No. 2
Employee compensation as a percent of GDP is down to the lowest levels ever recorded. 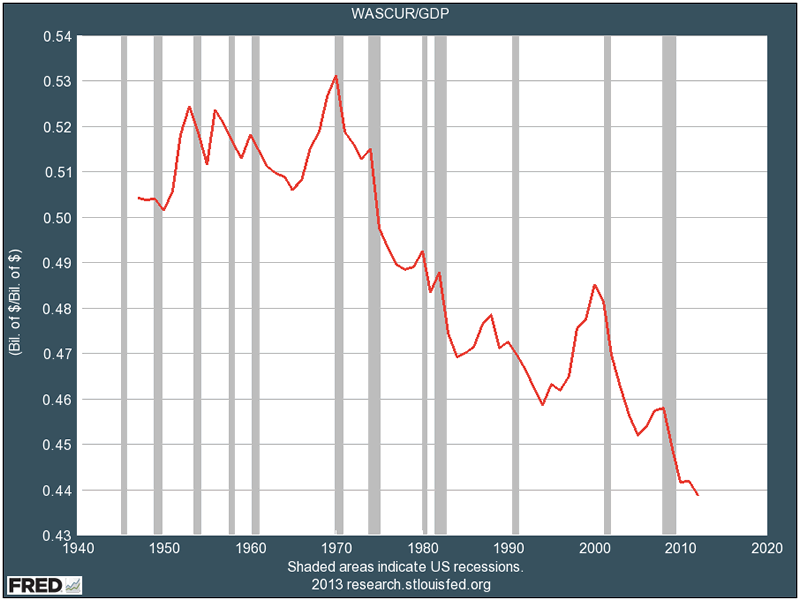 This is another chart that fairy-dusted federal policy makers don’t want made widespread knowledge.

The White House is trying desperately to convince the American public that things are improving, as are politicians from both parties who are anxious not to lose their seats at a time when trust in their abilities has dropped to all-time lows.

Despite having spent trillions on liquidity injections, average workers are getting squeezed harder than ever before. So while profitability is now at record levels – with the average S&P 500 company generating 9.9 cents per sales dollar, according to Bloomberg – compensation is headed for the basement.

Decades of shoddy economic policy are coming home to roost, and there’s not a damn thing they’ve done about it except serve up their own self-interested legislation while selling mainstream America down the river.

Not only are huge swaths of workers being “partimeified” in an effort to further boost margins, but wages are falling well behind GDP growth. According to the Bureau of Economic Analysis, as reported by Bloomberg, the ratio of U.S. wages to earnings is a mere 3.2 as of Q2 2013… and falling. By comparison, that same figure averaged 4.7 from 1947 until the beginning of the financial crisis, so we’re talking about a 31.9% decrease.

Disney boosted operating margins from 13% in 2005 to 21% while terminating loads of workers and closing offices. Defense contractor Northrop Grumman has bluntly raised expectations by cutting jobs to boost net income. Its profit margin rose 56%, from 5% in 2009 to 7.8% in 2012, as noted by Bloomberg.

This isn’t just a U.S. problem.

In Japan, for example, Toyota, Mazda, and Panasonic have all cut tens of thousands of jobs and closed once thriving production lines while offshoring remaining production.

Even Europe, with its comparatively inflexible labor laws, is feeling the bite despite being the slowest to cut labor and, as a result, boost profits. Italian labor unions, for instance, are trying desperately to hold on to nearly 200,000 jobs split amongst 150 companies looking to cut them. France, Germany, Spain, and England are in the same boat, with companies struggling to make a go of it.

Unfortunately, the issue may be moot.

Big American companies like Ford, Whirlpool, and GE are simply selling off European operations – or closing them entirely – to save their bottom lines from the hassle, not to mention the earnings impact. Asian firms like Sony and Fujitsu are rumored to be interested in dumping European facilities, too, and for the same reasons.

I believe incoming Fed Chair Janet Yellen is keenly aware of the international implications of cheap capital and expanding margins. So she’ll do everything she can to boost both, knowing that an estimated 40% to 60% of S&P 500 revenues come from overseas operations.

Charted Truth No. 3
Earnings have doubled since October 2009, while sales growth is slowing.

Under normal market conditions, slowing revenue growth and record-high profit margins are not a recipe for continued growth unless earnings can support the equation.

This time around, they are.

That’s because companies are willing to invest in potential productivity growth as long as the Fed provides the cheap capital needed to fuel it. By the way, this is what people mean when they talk about what was the “Greenspan put,” which became the “Bernanke put,” which is now set to become the “Yellen put.”

Normally, companies would be bracing for slowing activity. But this time around, they’re looking for additional earnings expansion using a trifecta of exceptionally low wage rate pressure, historically low debt service costs, and share buybacks that could boost year-over-year EPS growth by upwards of 1.5% to as much as 2%.

Yellen won’t risk upsetting this delicate balance if for no other reason than to serve Washington’s interests. I can’t imagine the pressure she’s under.